What are the four seasons in Ohio? Almost Winter, Winter, Just Like Winter, and Construction.

Like many good jokes, there’s a kernel of truth to this punchline. Some years it seems like spring and autumn vanish in the blink of an eye, blasting through our lives in a week before saying adieu for another year. And of course you know it’s summer when the orange barrels come out. Still, here in Ohio we experience the seasons in their due time, even if we’re sometimes to busy to notice.

In many ways, modern life disconnects us from the natural cycles that make the world work. We have air conditioning in the summer, artificial lights at night, and unseasonal food can be purchased at most grocery stores. And yet, the seasons still affect our daily lives in subtle and not so subtle ways. This should also be true for our fictional characters, whether they live in our world or some fantastical realm.

Something I’ve noticed recently in books I’ve read is a disconnect from natural cycles, especially agricultural. When characters step out of major population centers and into the countryside, worldbuilding sometimes takes some interesting turns. Whether it’s lambs being born in late autumn or suspiciously ripe berries in early spring, strange seasonal inconsistencies can be disorienting as a reader.

In this series of blog posts, I’d like to explore the seasons and how we can work with them in fiction to make our worlds richer and more grounded for our characters and our readers. We’ll discuss general agricultural cycles, designing your own fantasy plants and livestock, and how to bring some of that seasonal magic into your cityscapes.

The Wheel of the Year

If you’re familiar with Wicca or another Neo-Pagan religious movement, you’ve probably heard of the Wheel of the Year, a rotation of 8 seasonal holidays spaced out evenly like the spokes on a wheel. These include Yule, Imbolc, Ostara, Beltane, Litha, Lughnassadh, Mabon, and Samhain. But what if I told you that the Wheel of the Year can be a useful world-building tool for fiction writers?

Let’s drop the holiday names from the Wheel and replace them with the astrological events they mark: the solstices, the equinoxes, and the cross-quarter days in-between. What’s happening at each spoke?

Of course, the Wiccan Wheel of the Year is based on the British climate, and some of these examples are based on my own locality in Northeast Ohio. Exactly when these events are happening will vary depending on your geography. If you’re in the Southern Hemisphere, for example, the the solstices are flipped with the Winter Solstice occurring in June.

The Waxing and Waning Year

I first encountered this concept in Seasons of a Magical Life by H. Byron Ballard. I’ve represented this concept in the diagram by coloring the Waxing portion of the year in shades of green, and the Waning portion in shades of gold. Starting from the Winter Solstice, the days are getting longer and (eventually) warmer. I deepened the color as each spoke passes to represent the year gets warmer and greener with growing things. At the solstice, the year hinges and begins to wane. Things begin to ripen and become ready for harvest. As we move through the spokes, I have the golden color fading as the year fades towards the Winter Solstice. In these wedges between the spokes is the real activity of the year.

Using the Wheel of the Year as a World-Building Tool

If you are writing a fantasy or sci-fi world, you can get really creative with this. Just make sure the things you choose make sense for the period of the year that you’re placing them in. Future in future installments we’ll talk about things to consider when inventing your own fantasy crops and livestock. Remember, this is just a jumping off and reference point. You can deepen your world-building around any of these things later.

I hope you found this way of looking at the year helpful. It’s definitely helped me to reframe the way I think about the passage of time in my books. For the Woodland Curses series in particular I’ve been paying close attention to each season and how I want to showcase it in each book. Bared Magic was spring, while Cursed Magic is taking place in the height of summer.

Let me know what you think in the comments! 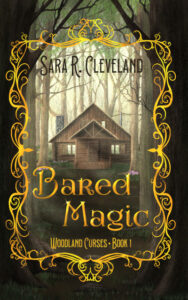